November 20, 2018 by Andrea Maldonado No Comments 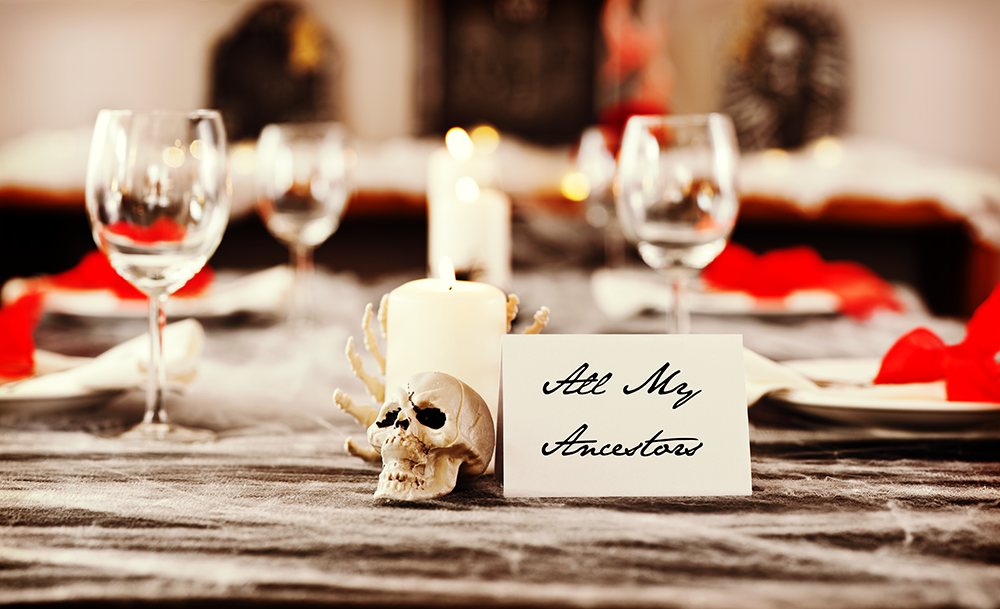 seeking credit
Juliana was super excited about her event. The coven had agreed to try a dumb supper and she jumped at the opportunity to host, “I’ll do it!” she exclaimed. Once the excitement was over, they spoke about who was bringing what as well as offerings for the deceased. She made sure to get all the information on allergies and preferences as you aren’t allowed to speak once the ritual starts. So excited with her task she spent the rest of the time leading up to the event gathering decorations and working on tentative menus.

On the day of, Juliana put on her music and danced her way through the prep work. Cutting boards set up into three stations. One for meat, one for veggies and the other for baking needs and prep while the pots were bubbling on the stove the baked items could go in the oven!

“Mijo, qué es esto?, what is this?” great great great grandma asked one of the kids running around. “Mama!” he laughed “that is called tofu, digalo, say it… Toe-fu” “Wakala” she said instead, turning  her nose up to the pale square on the cutting board. “Y esto?” she asked. “That’s seitan” he said. “ Aye Dios mio!” she cried “Satanus! El Diablo! Como va hacer?  The Devil! How can this be?” she questioned.

“Mama, that’s not Satan, this is what people who don’t eat meat sometimes use.” he explained. “Well if they don’t eat meat there is always chicken or fish too… ay el marisco, seafood is my favorite” she reminisced. “No mama, there are people who don’t eat anything from the animal. No milk, no cheese , no-” “Esperate!” she stopped him. “You mean, no cheese…. Ever? What kind of life is this? Are they sick?” she said, making the sign of the cross.

“ Aye, Mama, they’re not sick, they just don’t want to eat anything from the animal. It’s a choice. Food now is not the same like before, where you raised it and took care of it. The food industry is cruel and many animals suffer so people don’t want to be a part of that.” he explained. “Oh… I see… how sad that is…” she said softly. “Thank God I’m dead! “ she chuckled. Gwyddion laughed and ran away, looking for more friends to play with leaving Mama behind to supervise in the kitchen.

She had never met Juliana, they were born worlds apart and yet she always remained by the side of her granddaughter. She had her love for the kitchen, always cooking and keeping the house warm. The foods Juliana make sometimes confuse grandma but she always appreciates the seafood stew Juliana makes her every Samhain and this year was no different. Mama was responsible for making sure there was enough seasoning in the food and the pots never boiled over or burned when she was in attendance, her gift to her granddaughter.

Juliana had a separate area where she always left offerings for her ancestors. In her other practices they were venerated often if not daily and she tried her best to commune with them as often as she could. She didn’t have many pictures of her ancestors, especially the really older ones that were alive before cameras but she had their images in her heart and spoke to them when she felt their presence.

Today was one such day. Place the seafood stew at the head of the table where the “Guest” place setting was Juliana whispered “Mama,  this year will be a little different, this year you join me and my friends at the table.” “las Brujas!” mama cackled. Juliana felt the down hairs of her arms stand up and she laughed “Yes Mama,  the Witches!” It wasn’t often she heard them either but when she did, she felt extra magical. Her family would always be with her no matter what and that was comfort enough for her.

Celebrating the dead is not about mourning or crying although feelings do get stirred up in the process but it is about remember the good. Remembering all the happy memories, the stories that bridged a connection between people who had never met. It was the feeling of belonging to something bigger and the reminder that they are waiting for you on the other side, so there is nothing to fear.