November 5, 2018 by Andrea Maldonado No Comments 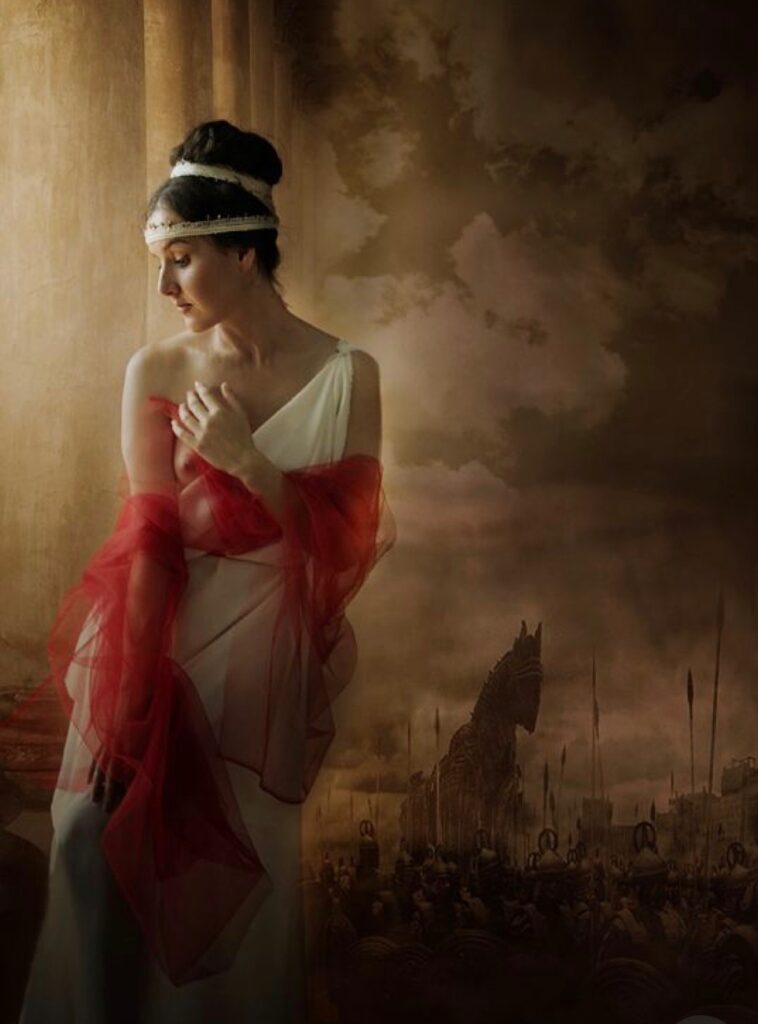 Andrea Maldonado | Gourmet Witch
Cassandra was in love with the God Apollo who showed her favor above all other human women. He gave her baubles and wrote her poetry all in the name of their love. Much time has passed in their relationship when Apollo approached her with a proposition. “I would like to give you something of more substance.” he suggested. “The gift of prophecy and sight could be yours, if you would just give me something else in return.” he purred. Cassandra knew what he wanted, he had pressed her for some time in subtle ways but was still unsure. “What could I do with this gift?”  She countered. You could be the greatest Oracle there ever was. Kings and people all over the world would travel just to speak with you. You would never want for anything in this life and would have the freedom afforded only to men, a choice. “I will consider it.” was all she said to him.

She prayed on this offer. Fasted and spoke to no one. He wanted to have her body, but what after that? They could never marry, and what man would want another’s spoils, even if they were Apollo’s , what would she do with her life? . The gift of prophecy though, now that would be a true blessing. She would know all that there was to be. She could help stop wars, warn the people of droughts, a bad crop year, anything they wanted to know, she would have the power to tell them.

Power. It was the greatest gift a woman could ever receive and yet she didn’t know a single woman to ever wield it. “Why me?” she thought. “He must not mean to keep his word.” she reasoned with herself “This is just a trick, I don’t deserve this. There must be something he is not telling me.”  She continued like this for weeks, brooding and turning the idea over in her head. Unable to figure out what he was planning she decided to go see him, and accept his offer, hoping that he would reveal the true reason for such a gift.

Overjoyed at the sight of her climbing the temple steps, Apollo flew down to meet his beloved. “Where have you been all this time?” he asked. “Oh, just thinking” she murmured. “I have decided to accept your offer.” she informed him.

Delighted, he lifted her up and flew into the center of the Temple, a place where only the Grand Cleric was allowed to enter, as this was the place where Apollo descended on to the Earth. In the center was a pool of water. It reflected the sunlight even though there were no windows. The ground was covered in green grass and the room was perfumed by the scent of flowers that did not grow anywhere else in the world. She was in complete awe of the place. He produced a seashell from his robes and dipped it into the water. “Drink this and receive my gift.”

She took the shell in her hands and then a deep breath. Opening her mouth, she swallowed all the water in one gulp, returning the shell to him. He kissed her immediately after and said “How do you feel?” “The same” she giggled. “ I knew it!” she thought to herself, nothing happened, everything is still the same. What he offered her was a lie because she was unworthy. “I feel the need to rest now” she told him. “Would you let me take you home?” he asked. “Sure” she replied.

Once in her rooms he put her to bed, covering her with a blanket. “Rest now, my dear, I shall return in a few days to receive my end of this bargain.” Drifting off to sleep she had terrible dreams. She saw the fall of Troy. A woman with a silver veil begged her to help her escape. She was afraid, repeating that she needed to escape or else everyone would die. She dreamed of her parents, murdered , her brother’s too. She saw burning buildings, fires that stretched all the way up to the sky, A giant horse galloping towards the city walls, trampling all under its hooves. Every night she dreamed more atrocities, thing to come? She wondered…. Should I say something?

When Apollo arrived, she was in a frenzy. Disheveled , pacing and talking to herself. “This can’t be” she repeated over and over again, shaking her head. “Cassandra” Apollo called. “I am here, come to me.” “No!” she shouted. “You are a liar! I don’t have the gift of sight, I have a head full of madness and things that make no sense…A Giant Horse!” she exclaimed. “What does that even mean?” “Calm down” he said softly. “Here, let me put your mind at ease.” “No!” she screamed again. “Get out!” she shouted. “You did this to me, you’ve tricked me!” she clamored. “Cassandra, there is no trick here” he said sternly. “Then why don’t I understand? Why am I having these nightmares?” she explained.

She pointed at him and said, “You knew that day in the temple I was having doubts. You knew somehow I would go back on my word and so, you’ve cursed me! Get away from me!” she shrieked.“Cassandra, stop.” Apollo’s tone was serious, scary even. “I did no such thing, you need time to adjust, to sort out what you are seeing, the information is rushing at you, it can be a lot to take in but do not accuse me of tricking you.” he chastised. “I will let some time pass and then return, when you are better.” He turned to leave when she shouted at him again “Don’t you dare come back! I want nothing to do with you, ever!”

“You don’t want to do that, a debt is left to be settled.” he reminded her. “I am aware!” she stomped. “ You can take back what you have given, I don’t want it, and I am not giving you anything.” throwing herself on the bed to weep, Cassandra felt the weight of the world crushing her all at once as he left.

She shut herself from the world again. This time, to heal and be renewed. Prayer helped keep her head clear as the messages flooded in. She learned with time how to interpret them and once she was comfortable with herself, she stepped back into the world, hoping to carve a place for herself. What she did not realize, was that the world had changed ever so slightly, the seed of those prophecies coming true.

She walked through the palace that night, taking in the beauty of her home, for it had been a while since she had seen it. Walking through the dark halls was a figure, covered completed but she could make out the shape of a woman. Cassandra followed close behind her, watching her dart in and out of corners, clearly unsure of where she was. Curious, Cassandra rushed up to her and the woman turned to face her. The veiled woman sent Cassandra reeling to the ground. “No” she whispered, “ It can’t be.” “please” the woman whispered. “Please help me escape, I need to leave this place and return to my home at once! You are all in -” “Silence” Cassandra hissed. “I know who you are, Helen” I will have you released at once, go to your rooms and wait for me there.

That morning Cassandra emerged from her rooms at day break, begging an audience with her parents who quickly ushered her in, having missed her during her isolation. Before they could say anything she quickly began “ You must send her home.”  “What?” the King said. “Helen, father. You must send Helen back home. Troy will fall if she remains here.” The King sighed, looking at his wife with sadness in his eyes. The Queen motioned for Cassandra to sit by her, “My dear, your brother will not be reasoned with. He loves her and wants to marry her. Helen has warned us about her husband temper and his pride. He sets sail here now, coming to reclaim his wife or go to war. We have tried but he will not give her back, so now we wait for the Greeks to invade our land.”

“Mother, Father, please listen closely to what I have to say…” Cassandra explained her new gift, which is why she isolated herself for that time. She told them all she had seen. All about Helen, the battle where Hector would fall because of Paris’ cowardice, how there was a giant horse, and how they would all die. Concerned, her parents called in the servants “You need to rest dear, we will send for the physicians” her mother said. “No! I know what I see, I know what is going to happen, you have to listen to me!” Cassandra begged.

in that instant she heard a voice. “They will never believe you” it whispered. “Not because I made it so, but because you don’t believe in yourself. Your curse will be to foretell the future of all around you and never be believed. The lack of conviction you have will shine through the most, making you look weak. You will be cursed to see all these things befall the people you love including your own demise, which I will turn a blind eye to, and you will not be able to stop it. I offered you power but instead you chose to doubt yourself, this is your self imposed curse, my beloved. “