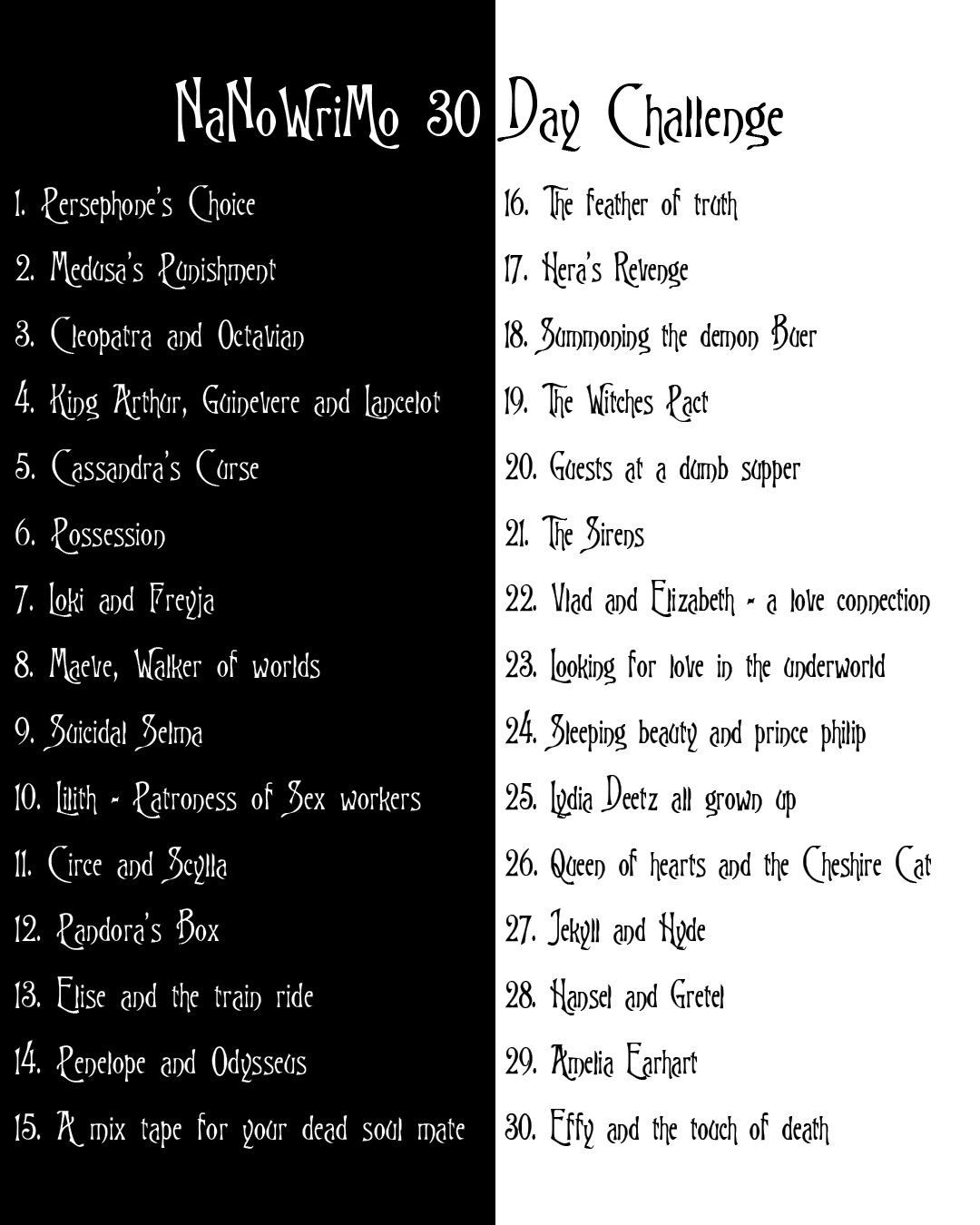 November 1, 2018 by Andrea Maldonado No Comments

It’s that time again folx! November is here and once again, I decided to do writing prompts rather than try to bang out a 50k word novel. The book in my head is my baby. I have been nursing it for five years now and have hardly scratched the surface. I am in no way prepared to take on such a serious endeavor at the moment so instead, I am going to flex my brain muscles and get the creative flow going throughout this month in solidarity with all those brave writers participating this year! I am rooting for all of you!!!!
With that being said, most of these stories will be raw drafts that may one day be elaborated on but the purpose right now is to share and to write. I will be checking for spelling errors, grammar etc but I’m not a great editor. Looking for one though 🙂 .

This round of prompts focus on retellings. Don’t you ever wonder what would happen if the character’s made different choices? What if the story was being told from another person’s point of view, would it not still be the truth? This month I explore stories from myths, classical writing, some personal ghosts who haunt me, pop culture icons and a few other random stories in between. Anyone who wishes to write their own version, please jump on board and tag me on Instagram as well as #writewithdrea . If you don’t want to write but enjoyed reading , at the end in the comment box, tell me what you loved about the story. Ask a question, leave some encouraging words or just let me know you read it! I love hearing feedback from my readers. You’re the reason why I do this.

In my brain I have committed to posting daily. I am going to try really hard to do that, but if I can’t ( because life) I will post as soon as I possibly can. Excerpts will go up on Instagram, link will be provided in the bio section for your convenience but the whole story will be here. I am looking forward to doing this and sharing my other passion ( writing) with you all while I give my body time to rest and gear up for the Yule season. Happy Reading! 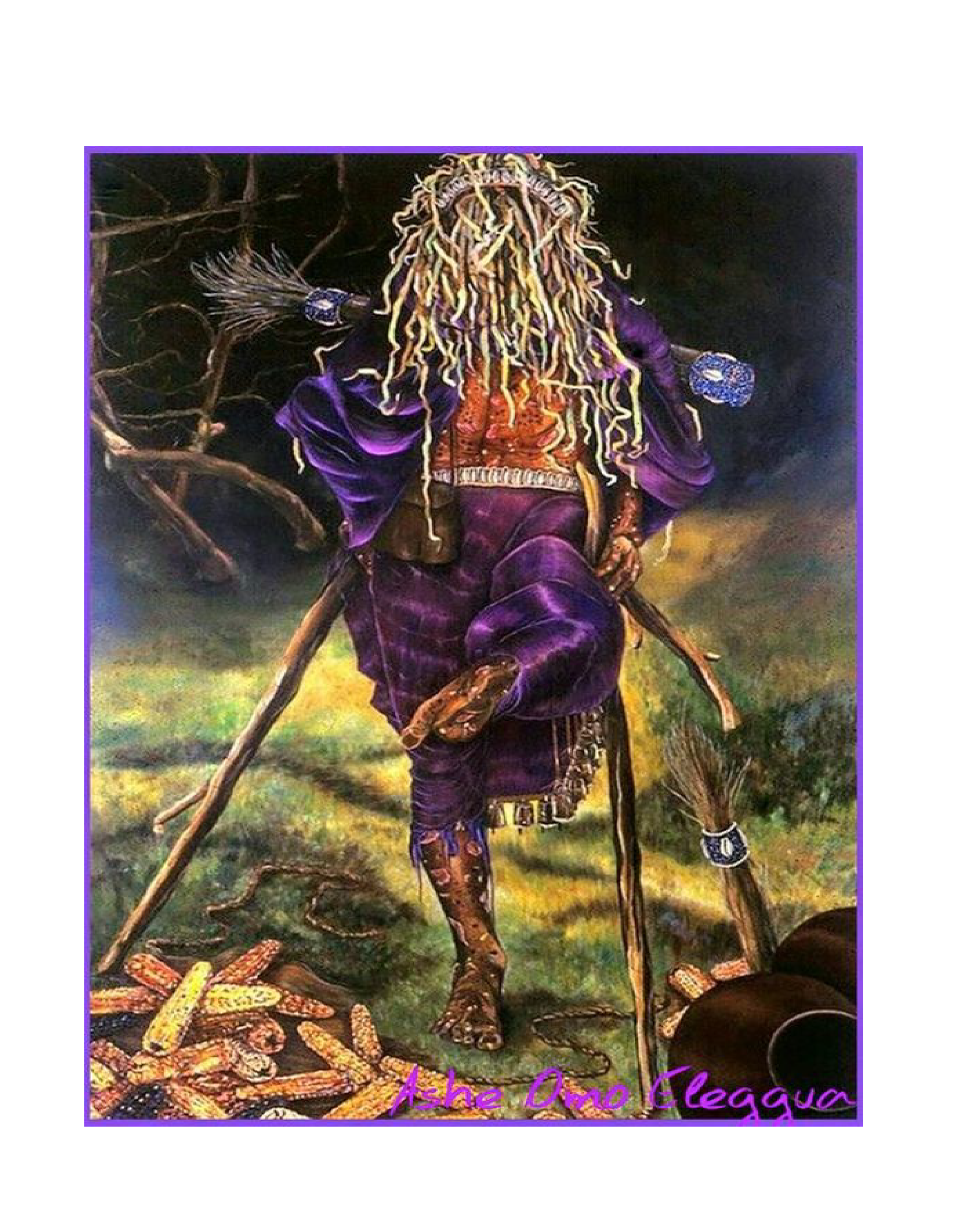 November 3, 2017 by Andrea Maldonado No Comments

“My child” he said softly. “Come with me, let us leave this place. You need suffer no longer. The pain, all of it can be gone, just take my hand” he beckoned. Listening to his melodious voice she began to think of what it would be like to leave with him. She didn’t want this pain anymore, she was lost and her body was giving up. There was a ringing sound, a bell perhaps. Was it tolling for her? Was her time up ?

In the fever haze she heard the phone ring. “Hello?” “Hi Honey, you sound terrible are you ok?” Her mother had called, instinct must have driven her to do so. “Hey mom, I’m not feeling too good, I have a fever so I’m resting.” she explained “How high is it?” her mother asked, with concern in her voice. “I dunno, let me check.” putting the phone down, she tested her temperature. 103.4 degrees. Fear set in. Pestilence was here to claim her. Soon her body would go into shock and the climbing fever would kill her. “I’m back mom, the fever is 100.3” she held back the tears as the lies sprang from her lips.

“Honey that’s high, how long has it been?” “6 hours” she replied. “You need to go to the hospital.” “Mom, I cant, no one is home, I dont have the money to get there, I’ll wait for the girls to come back, it should be soon.” she tried to reassure her mother as best as she could.

“Who knows when they will get back! I am going up there, I’ll be there in 2 hours, I promise, let me get ready” “No, mom” she interrupted. “No, it’s too far for you. The hospital is far, you don’t drive and we don’t have a car. The cab fare will be a lot, this isn’t new york city, everything is expensive. Don’t worry about me, please. I will go as soon as they get here.” she pleaded. “I really don’t like how you sound, I’m terribly worried.”

“Mom, by the time you get here the girls will be back and I’d be on my way to the doctor, besides, I took some medicine it should break soon, I’m going to lay down, I need to rest.” she heard her mother muttering to herself, probably trying to figure out a fast way. “Mom, I’m going to sleep. It will be alright. It’s all I want to do, I need to sleep, I love you mom.” i said, drifting. “I love you too sweetie” she said softly. “I love you mommy, goodbye, I’m leaving.”

She slipped away into sleep. Pestilence was there to greet her. “Are you ready?” he asked her. “My mother, she is worried about me, I am far from home, I miss her.” she began to explain. “No need to worry, she will join you , so will everyone else, just be patient, let’s go.” he urged. “I said she is worried, Im not going, release me!” she demanded.

He snickered and waved at her absently “Silly girl, your fever is climbing, your skin is burning, the pus is beginning to fester, you won’t last long, no one is coming, I am holding them up, no one will come to your aid, end this now and suffer no more.”  Standing her ground she replied “No.” Pestilence disappeared before her eyes. She was left alone, in the nothing.

A figure appeared in the distance. He was slow to reach her, carrying himself on wooden staff. He was followed by a brilliant light, glowing and warm. As he approached she could feel the tendrils of light, climbing over her body like vines.

“Little one” he said to her. “You are one of my chosen. The fever will break, your wounds will heal, you will rise again, as I did, but you must fight and choose life. What say you?” “I want to live” she replied. “Then fight and wake up!

Her eyes sprang open and she screamed, sucking air into her lungs. “Oh thank God.” one of her roommates said. She was in the tub, shower head on full speed, pelting her with icy water. She was frantic, desperate to get up “What is going on? How did I end up here? Turn this off Im freezing! “ she cried. “We found you on the floor in your room, you were passed out and burning up, we dragged you in here to try and wake you up. We were about to call the ambulance!” they explained.

“I am so sorry” one apologized. “Class ran late and there was unusual traffic on the bridge coming over. I’ve never seen a jam like that in the two years we’ve been here, it was really strange.” the other explained. “How are you feeling?” they both asked.

She was disoriented but felt better. Shaking her head, she asked them to get her back to bed and to check her fever. 99.1 degrees read the thermometer, the fever was breaking. “Can I get you some soup or tea?” the girls were dotting on her, trying to make her comfortable. Before she could reply they bolted down the stairs into the kitchen. 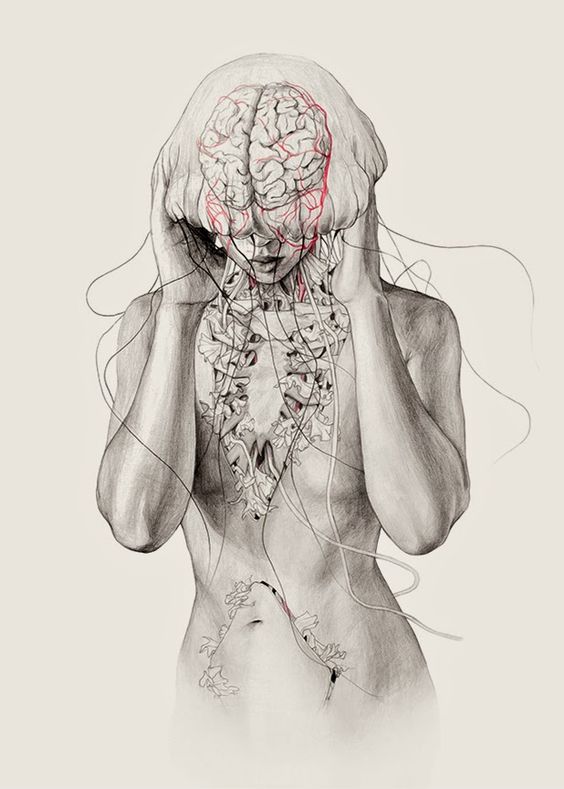